When Vince Chu is on the clock as the team manager for the Rams men’s basketball team, he likes to get to the Mattamy Athletic Centre (MAC) early and shoot hoops before turning his attention to the rest of the team. 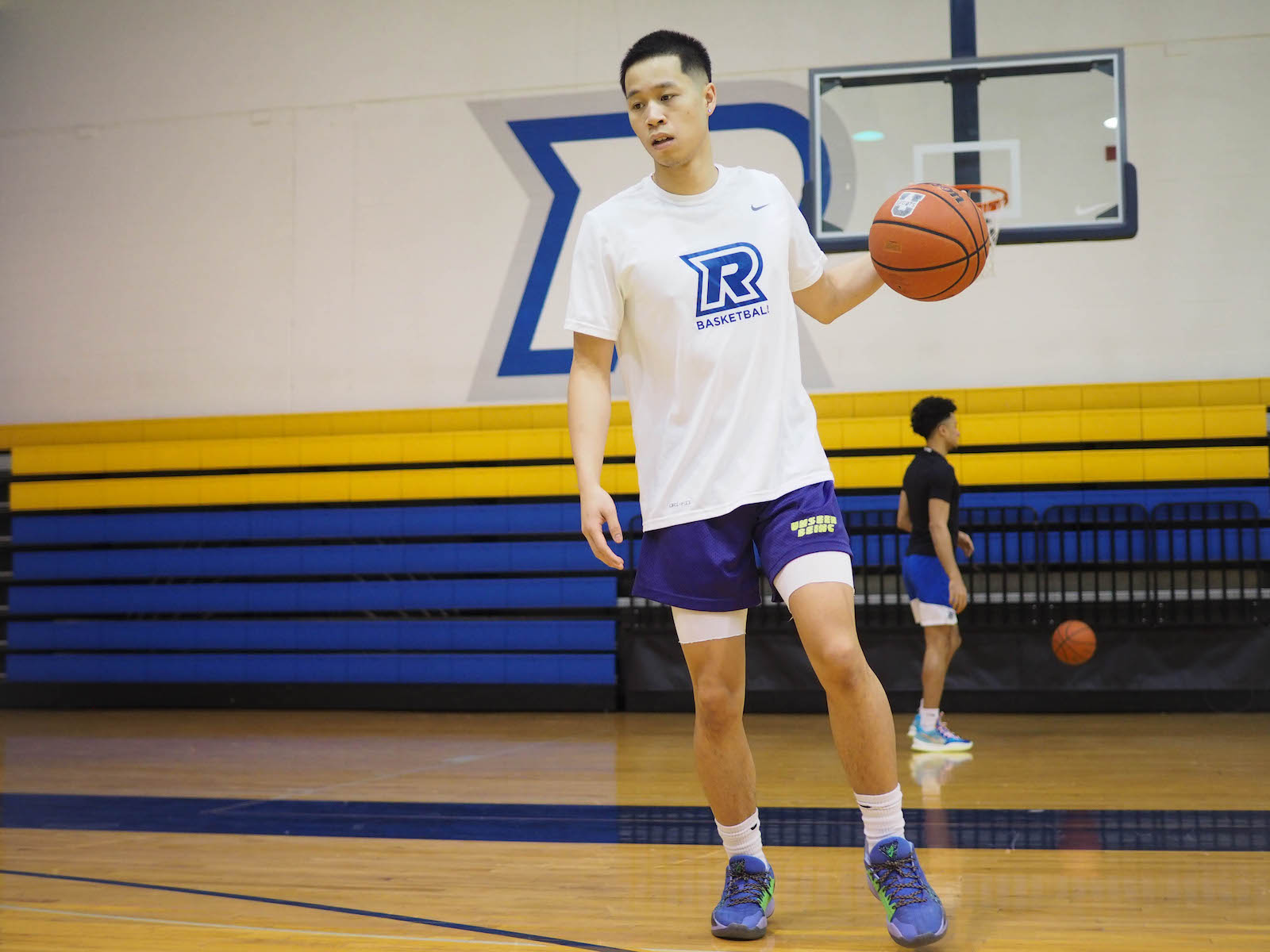 Vincent Chu practices basketball at the MAC in the off-season. (Jes Mason/THE EYEOPENER)

He’ll get the gym ready for the players 30 minutes before the start of practice—bringing out the basketballs and setting up the shot clock and water bottles so the athletes and coaches have nothing to worry about once they get there. When Chu has a spare moment, he’ll watch videos on YouTube of the behind-the-scenes work within the National Basketball Association (NBA), workout videos and highlight reels, because he can’t see himself doing anything that isn’t related to basketball.

In high school, Chu didn’t have a plan for post-secondary. All he knew was that he wanted to play basketball, and one day make it to the NBA, like his friend Shai Gilgeous-Alexander who was drafted by the Los Angeles Clippers in 2018.

Born to immigrant parents from Vietnam and growing up in Hamilton, Ont., Chu’s goal was to finish school and “figure it out after” in an effort to please his parents. 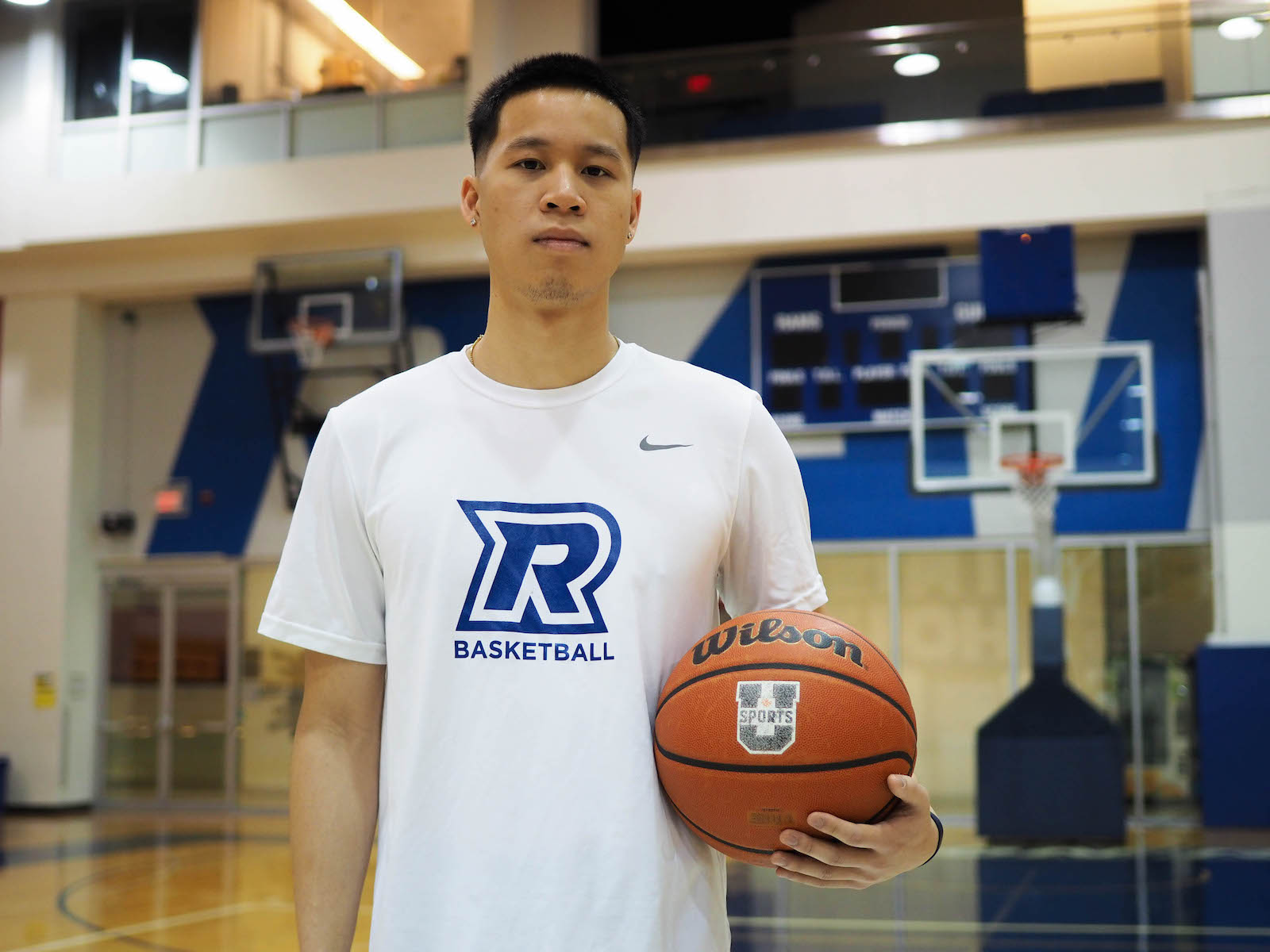 “[My parents] didn't fully understand what basketball was to me, they just thought it was a hobby for me to lose weight at the time. They didn't know that it was a love and passion,” he says.

“Throughout my life, I've struggled through maybe like, three different career paths,” he says. “The only constant thing about my life was that I knew that I always loved was basketball.”

However, Chu’s grades weren’t good enough for him to be accepted as a transfer student, so he retook some high school classes in order to make the move to Toronto.

“It's not where I thought I would be at 22, 23 years old. But honestly, I just had to put that all aside and have a little humility and just embrace it,” Chu says. “If I put in the work and just put my head down, then one day, I can hopefully reach the NBA at some capacity.” 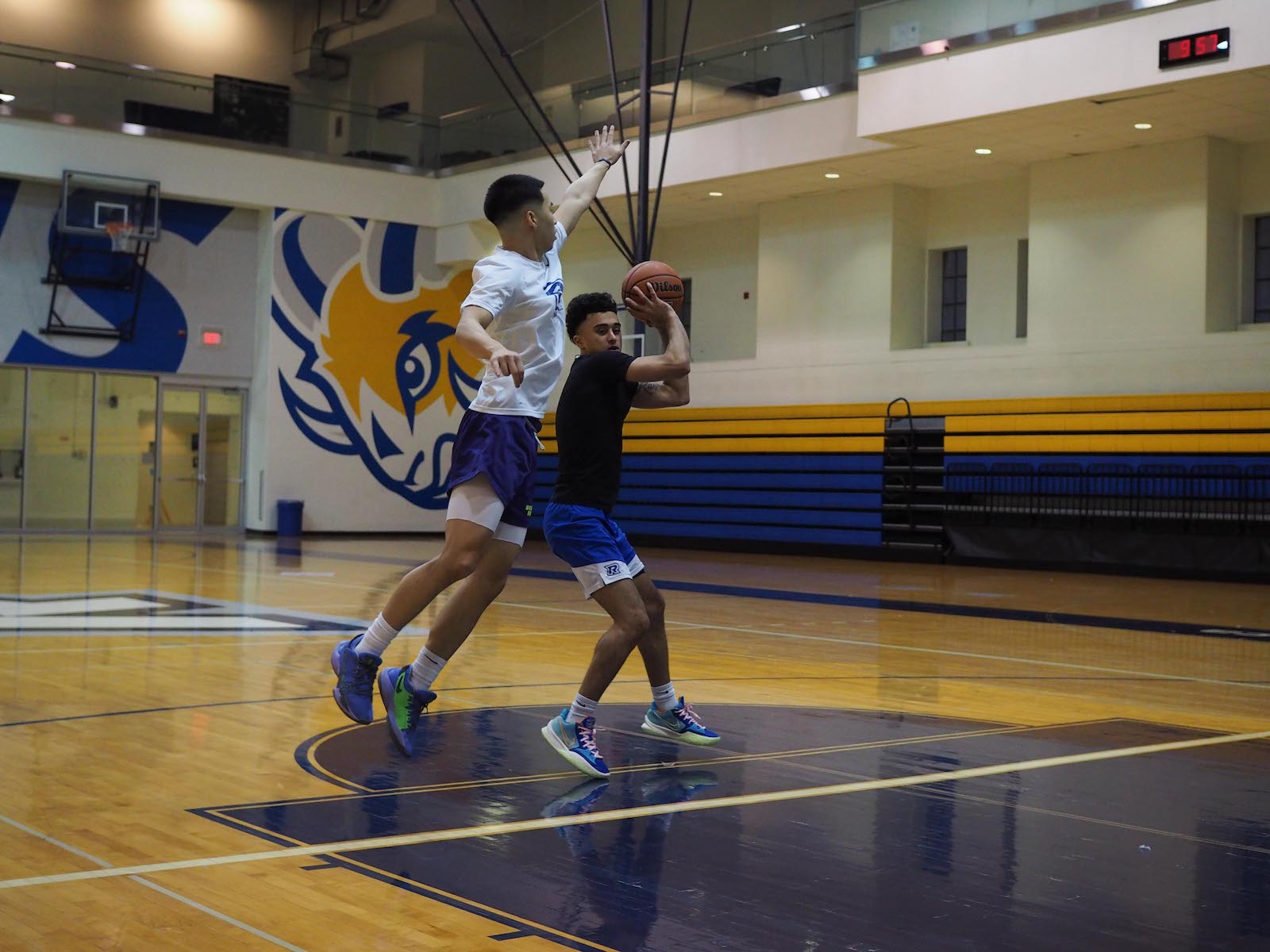 When it comes to Ryerson’s sport scene, the athletes dominate the spotlight. But behind the bench, there’s a strong network keeping the Rams running that many fans don't know about. Whether they’re working directly with the team making sure athletes are in tip top shape for the playoffs, or being the loud, booming voice over the MAC’s PA system, these unsung heroes are finally getting their time to shine.

Every day is different for Rams athletic therapist Michelle Bell; from attending practices to offering one-on-one therapy sessions with student athletes, to getting on calls with coaches, to prepping for evening games. It’s why Bell believes that athletic therapists are the heartbeat of a team, with the MAC becoming her second home, and the athletes her second family.

Bell has been working as one of three athletic therapists for the Rams since 2014, but her journey at Ryerson didn’t start there. While she was studying athletic therapy at Sheridan College from 2007 to 2011, she worked with the Rams as a student therapist. She says her positive experience with the teams, coaches and mentors led her to apply to the full-time position three years later without hesitation. 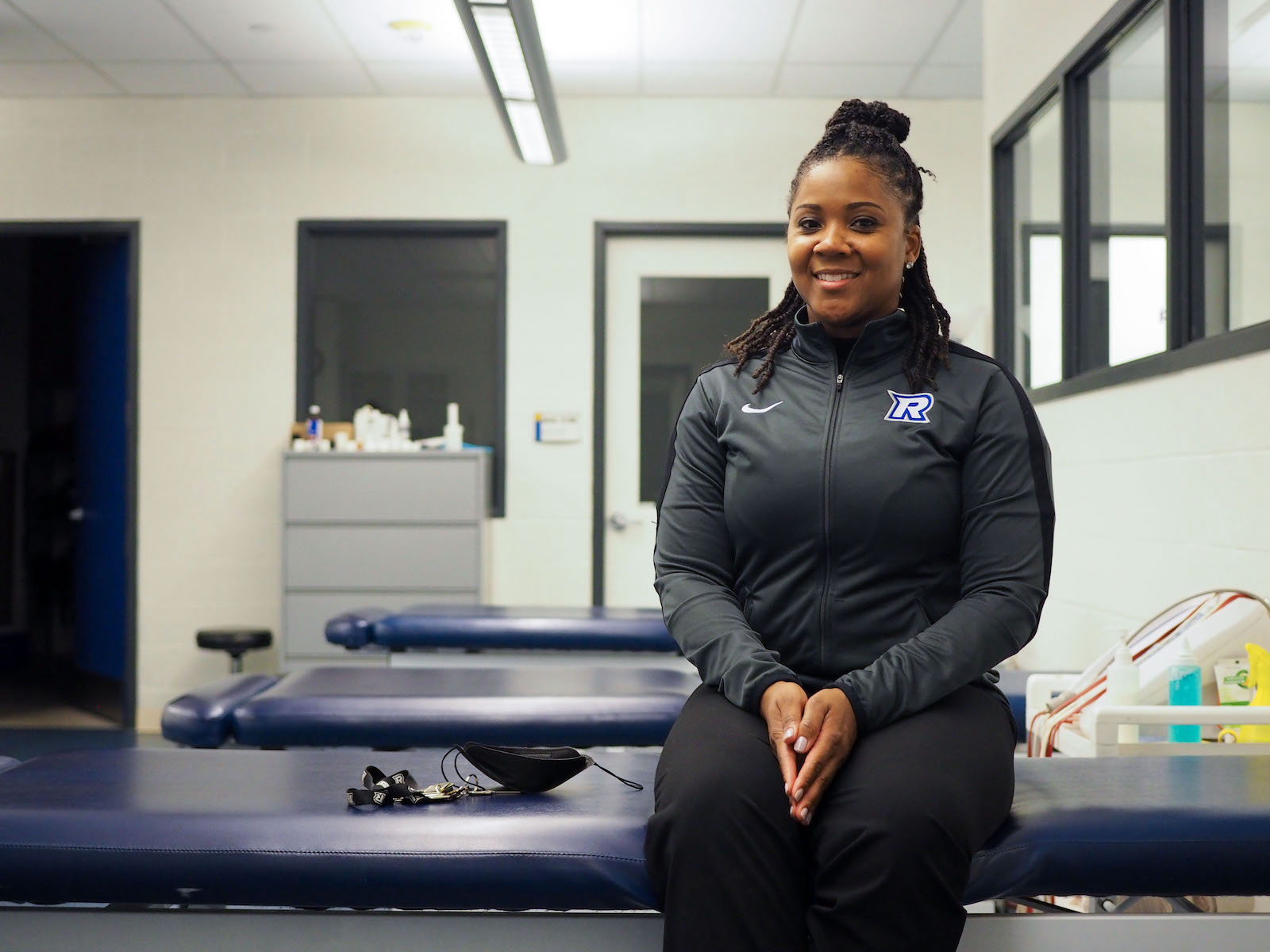 Michelle Bell, an athletic therapist for the Rams, sits in her clinic at the MAC. (Jes Mason/THE EYEOPENER)

“Ryerson had definitely opened my eyes to what it was like to be within sport, and our programs were elite level,” she says. “My supervisors and mentors were all amazing to shadow and [helped me] understand what the role involves.”

Over the last eight years, Bell says she’s established close connections with many athletes, seeing herself as a big sister and supporting them beyond sport. “When you're in this role, you are not only a certified athletic therapist, but you become a provider,” she says, adding that she’s helped athletes focus on a career path, review their resumes and has even driven them home after games and practices. 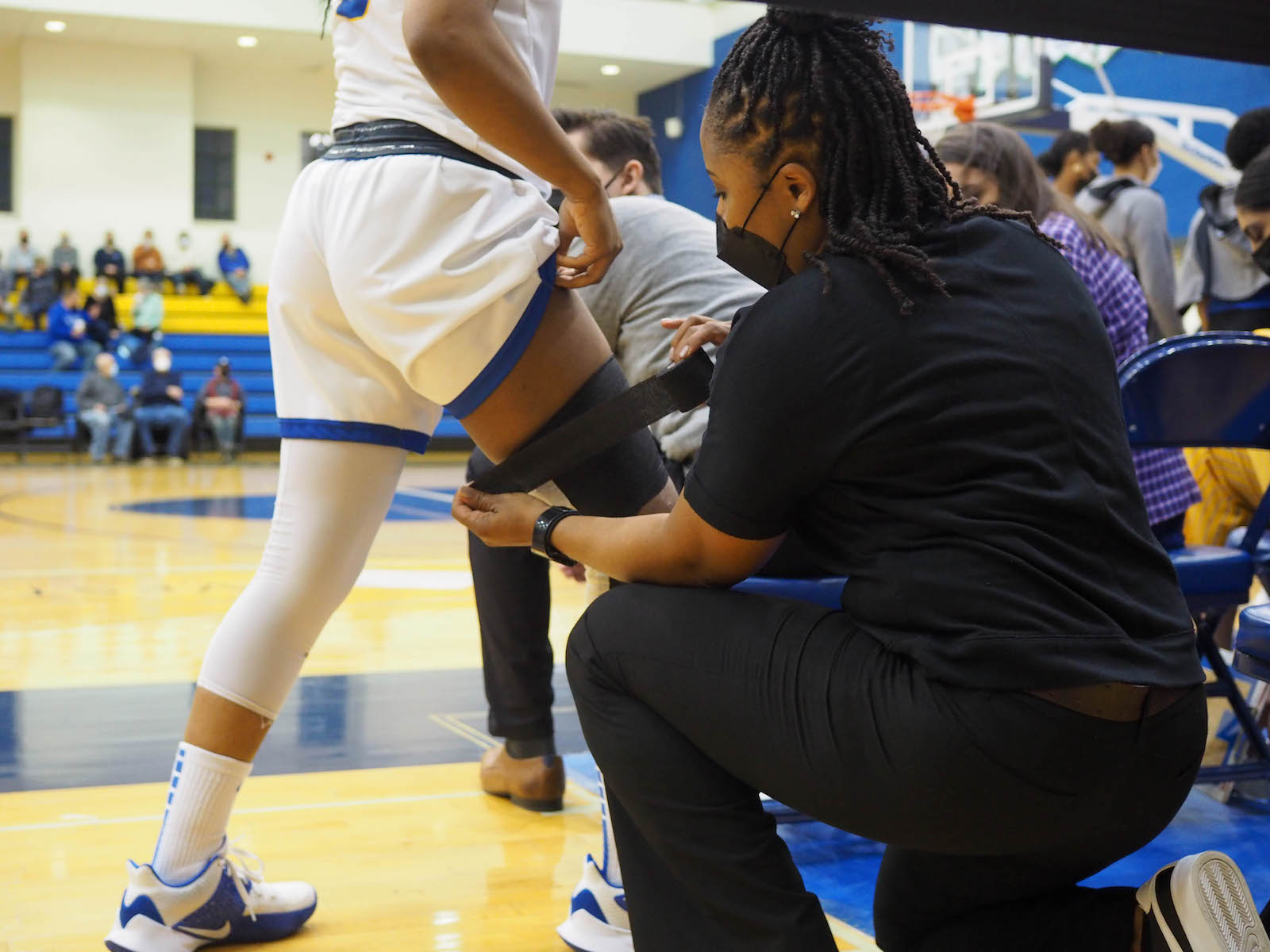 Michelle Bell tapes a player’s leg before tip-off at the women’s basketball OUA semi-final on March 23.

Though Bell is first and foremost an athletic therapist, she also helps out with managerial duties, counselling for athletes, basketball operations, financial management and event planning. When the COVID-19 pandemic hit, the necessary health and safety protocols added another task to her list.

Bell has started several initiatives to provide student athletes with a safe and comfortable environment, including asking a “question of the day” to give them a chance to talk about anything but the sport they play or their injury. She strives to take a deeper dive into conversations outside of sport, and says she hopes to continue developing Ryerson’s therapy program with a similar mindset. 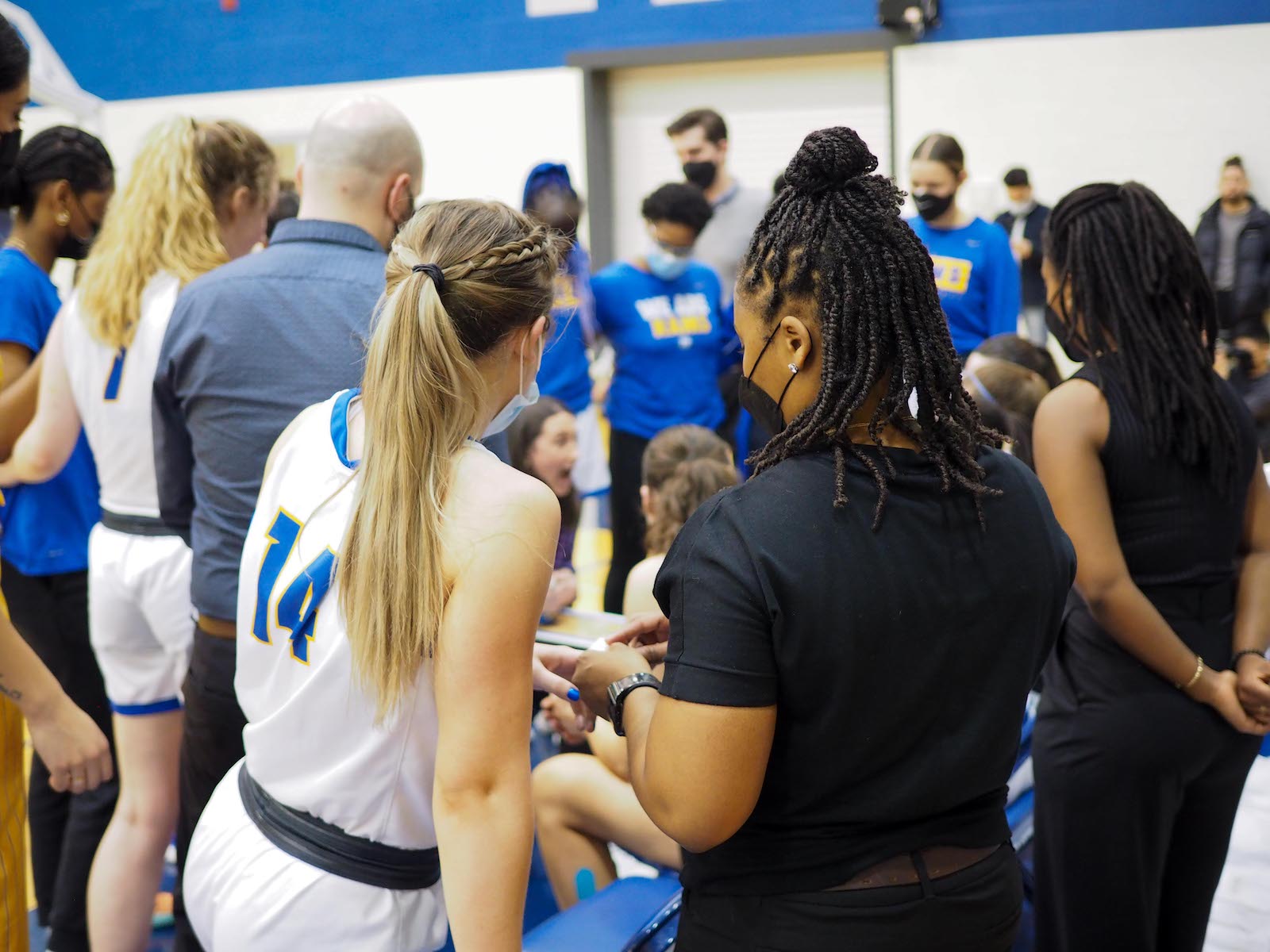 Michelle Bell works with an athlete during a time-out at the women’s basketball OUA semi-final at the MAC. (Jes Mason/THE EYEOPENER)

“The goal will always be to focus on how we can make our programs better than they were yesterday,” she says. 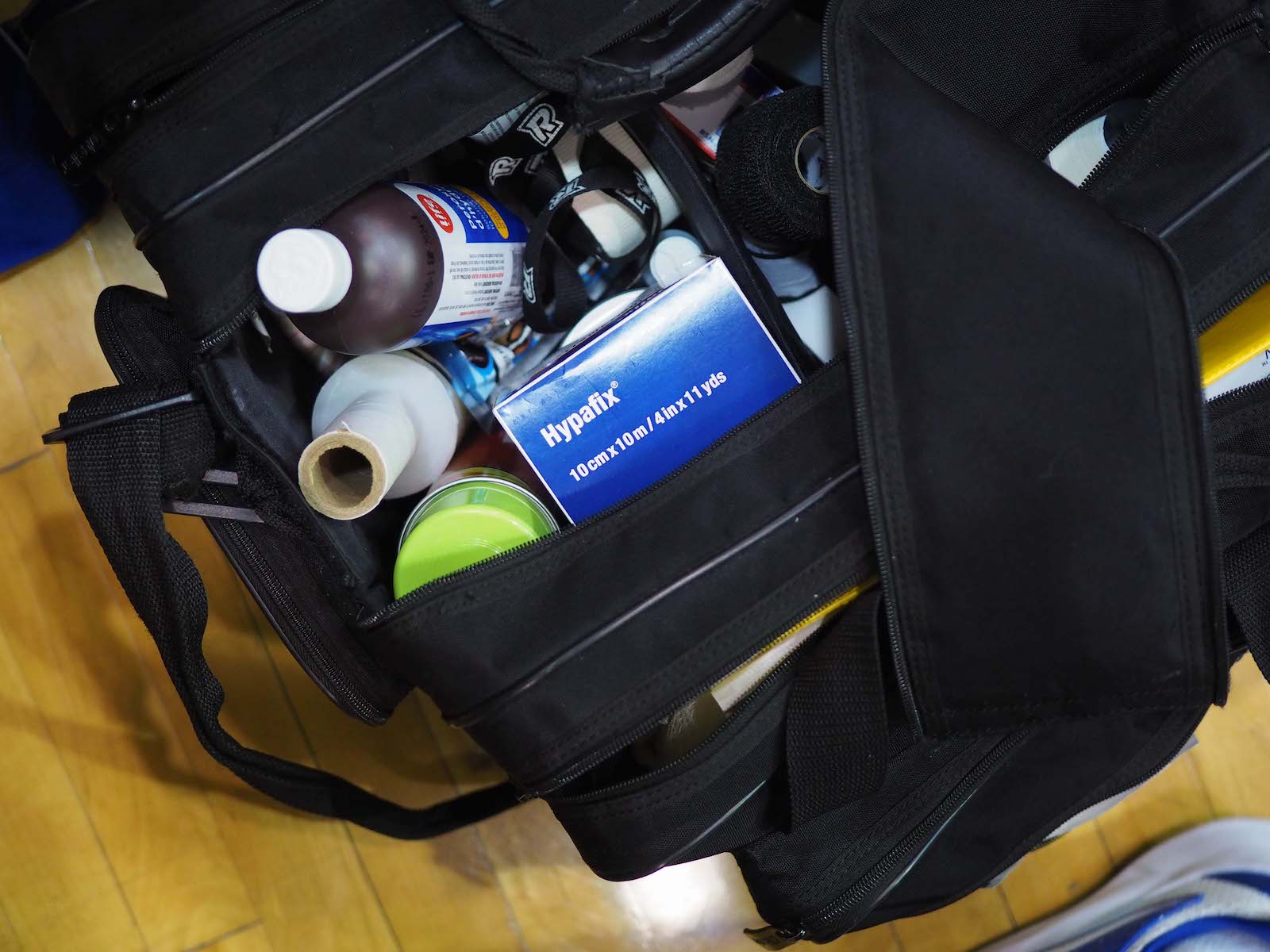 
Kevin MacDonald hit the mic at the MAC when he was in his first year of the RTA sport media program in 2014. The first event he called was a volleyball exhibition game while training with RTA sport media alum and former PA announcer Alex Bloomfield—or “the voice of God,” according to MacDonald.

MacDonald remembers Bloomfield looking over his shoulder and telling him what to say and do to make sure he didn’t miss anything. Once he was comfortable on his own, MacDonald was able to develop his personal PA announcer style and quickly became the iconic voice for Rams games at the MAC.

When it comes to PA announcing, MacDonald initially wanted to apply for the position with the Rams because he had “a pretty deep voice and it could sound kind of cool.” However, it was announcing the starting lineups that really made him fall in love with the role.

“I pick up the energy and I go, ‘Now here's the starting lineup for your Ryerson Rams,’ and the first few times I did that, the crowd [was] getting into it and cheering when I said that—it's very addictive,” MacDonald says. “They're obviously not cheering for me, they're cheering for the players, but the energy is a high that you keep chasing.”

“I know that I’m very much in the background—I’m just background noise at a lot of these games,” he continues. “People do hear me but it's not like they're actively listening to whatever I say, but it does give a cool little atmosphere boost when I jump on the mic.” 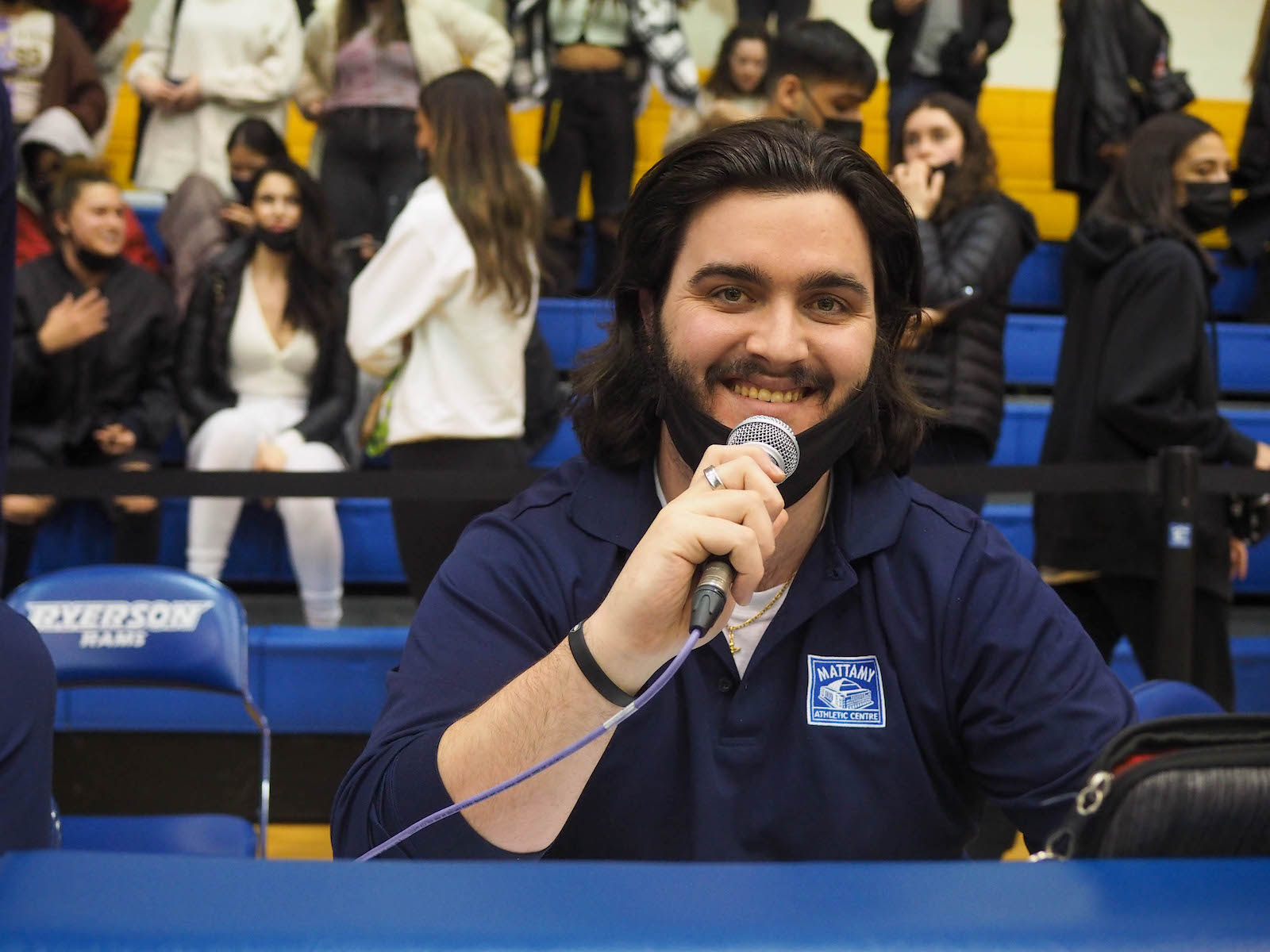 Kevin MacDonald is an announcer for the Rams. (Jes Mason/THE EYEOPENER)

Throughout his years on the mic, MacDonald has established several rituals that he does before and after games. One of them includes keeping track of every game he’s called in a tally on the scorers table—he’s announced almost 300 games to date.

In 2018, MacDonald was set to graduate and leave his PA announcer job at the MAC. Though he called a few games here and there just before the pandemic, MacDonald also works as the announcer at Humber College along with Ryerson where he re-debuted earlier this academic year, training the next generation of announcers.

“[Coming back] was pretty cool because there's a few senior players on the volleyball and basketball teams that knew me when I was still the regular announcer,” he says. At the same time, MacDonald also says he felt old while talking to first-year students, who would've been 10 years old when he first started at the MAC.

Like Chu and Bell, MacDonald also wears many hats when it comes to working with the Rams. Aside from being on the mic and working as the assistant coach with the men’s baseball team, he is also director of operations for the men’s hockey team. 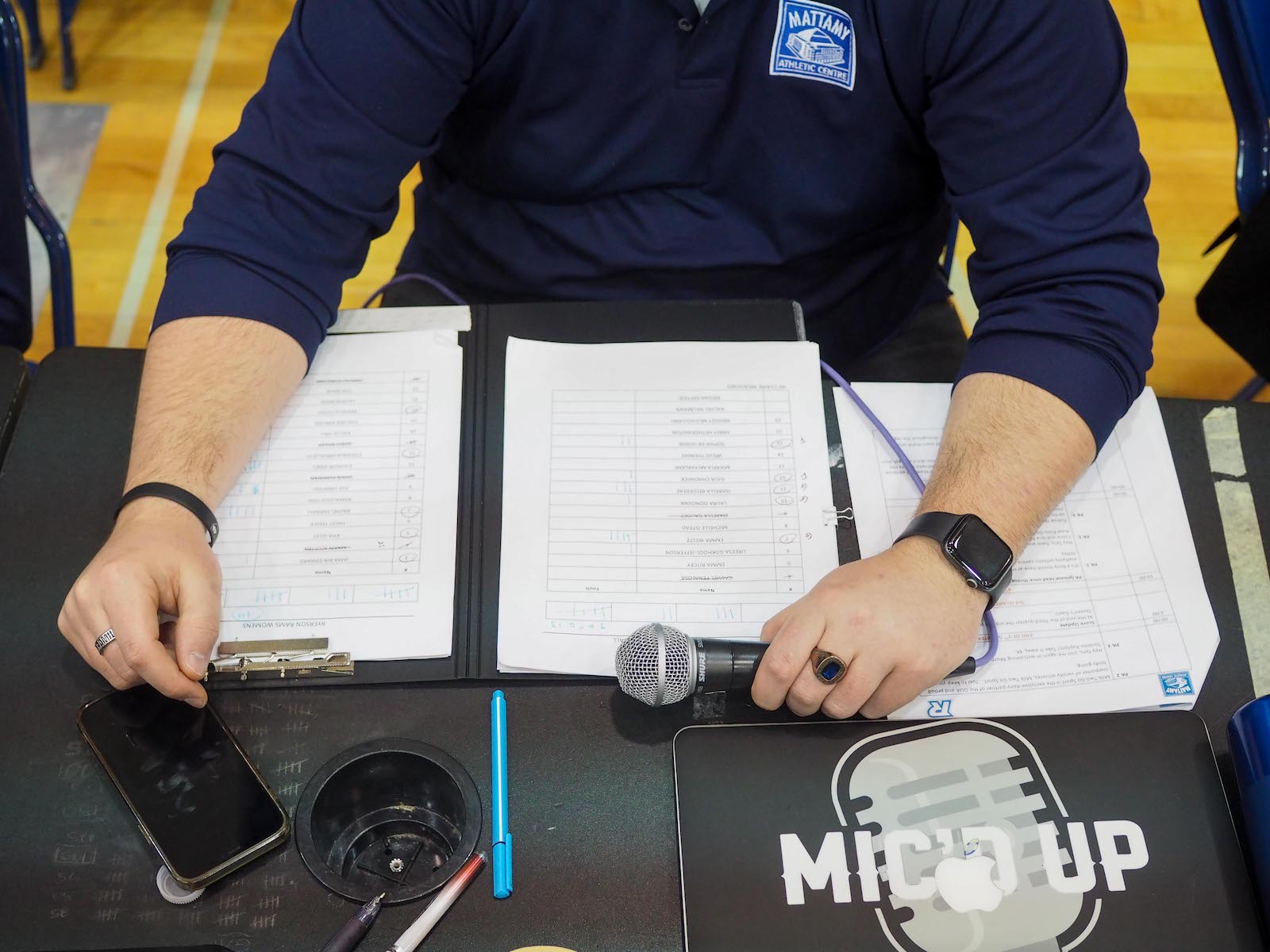 “I'm kind of a jack of all trades with their team…[When] they need something done they turn to me and I figure out how to help them get it done,” he says.

Chu says that although he “jumped at the opportunity to hand out waters and towels” when he first got to Ryerson, his role with the Rams goes beyond just carrying out their equipment. 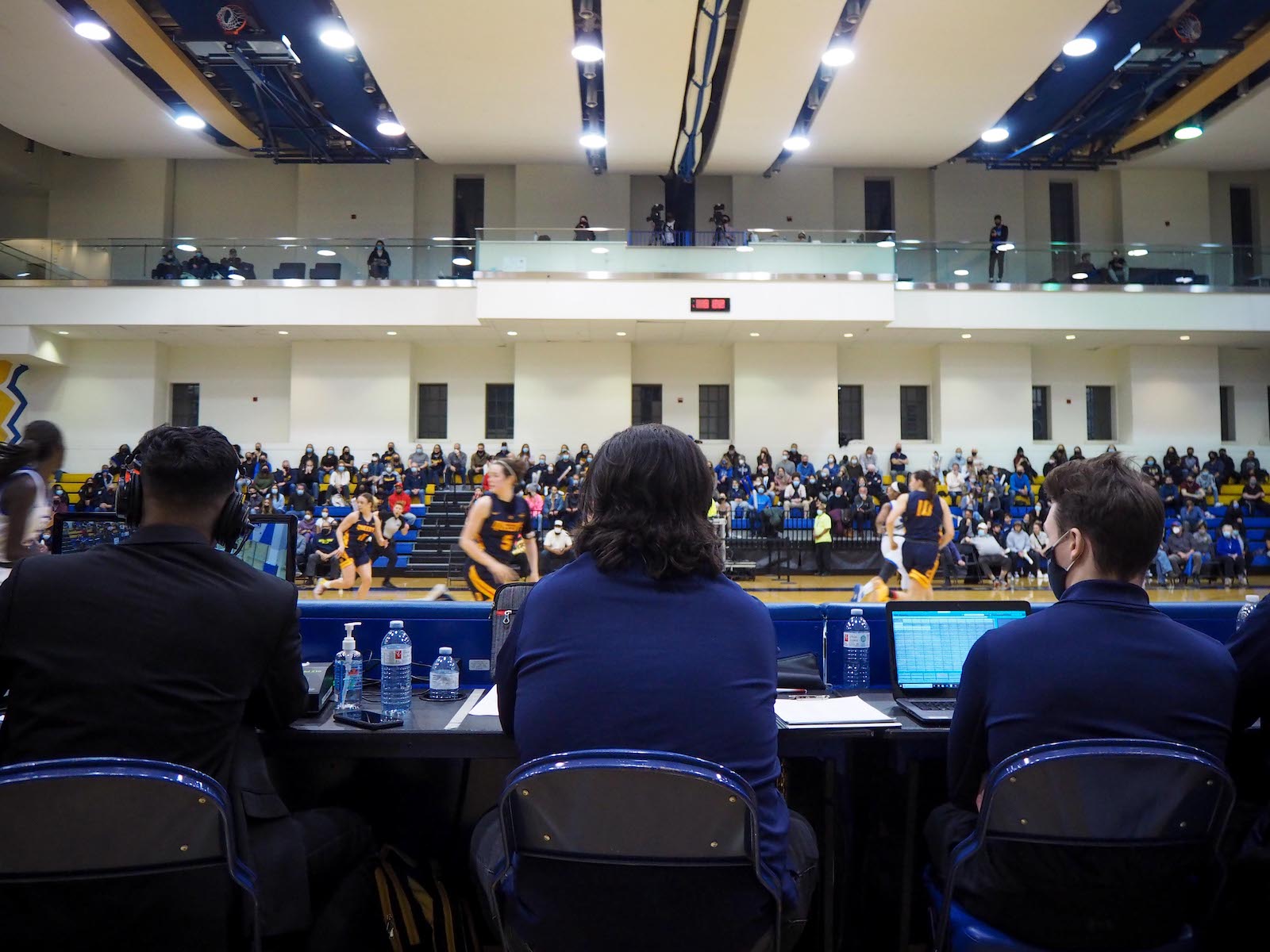 “These guys have definitely made me feel like a part of their family. I even have my own spot in the locker room,” he says, adding that the players can come to him about anything, basketball-related or not.

Chu says his role at Ryerson is pretty solidified and he looks forward to the next few years he has with the Rams. However, he is also eager to take on more responsibility and improve his skill set and knowledge of the sport.

“At the end of it, hopefully my cheques will be signed by the NBA.”

Vincent Chu practices basketball at the MAC in the off-season. (Jes Mason/THE EYEOPENER)

Michelle Bell, an athletic therapist for the Rams, sits in her clinic at the MAC. (Jes Mason/THE EYEOPENER)

Michelle Bell tapes a player’s leg before tip-off at the women’s basketball OUA semi-final on March 23.

Michelle Bell works with an athlete during a time-out at the women’s basketball OUA semi-final at the MAC. (Jes Mason/THE EYEOPENER)

Kevin MacDonald is an announcer for the Rams. (Jes Mason/THE EYEOPENER)